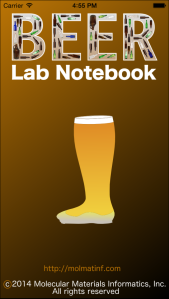 Today another of my apps just got through onto the store: the Beer Lab Notebook, which can be found on the iTunes AppStore. The name of this app is inspired by the title of my last new app (the Green Lab Notebook): its subject material is more or less serious, depending on your priorities. The app is designed to help record the process of creating a fermented beverage, as practiced by millions of homebrewers, myself included. END_OF_DOCUMENT_TOKEN_TO_BE_REPLACED

Lately I’ve been getting my feet wet learning the latest new programming language from Apple that everyone is talking about: Swift. The short conclusion is that it’s pretty good, but unsurprisingly has quite a collection of glitches: some of them are fixable, some of them are annoying arbitrary choices that I’ll get used to, and others are probably more like design flaws that are unlikely to ever go away. I’m cautiously optimistic that the latter category is fairly short, though still too early to call it. And because Swift is such a new language – hot out of the oven, as it were – I was not inclined to rush in and start coding up anything that’s directly important to my company’s cheminformatics software stack, so instead decided to take a little detour and make a new app from scratch: something fun, that I’ve been meaning to do for ages, called the Beer Lab Notebook, written entirely in Swift, with no non-Apple dependencies. But more about that particular project in a later post. END_OF_DOCUMENT_TOKEN_TO_BE_REPLACED

After a good long while in development, version 2 of the ChemSpider Mobile app is now available on the iTunes AppStore. As one would expect from an increment of the major version number, the new release is a major overhaul, starting with an entirely new aesthetic which splits the difference between the iOS 7 mojo and the contemporary branding of the Royal Society of Chemistry, which owns and operates the ChemSpider service. END_OF_DOCUMENT_TOKEN_TO_BE_REPLACED