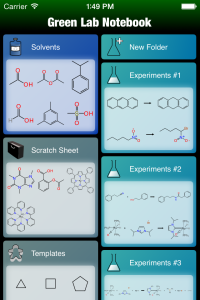 Last week I was at the American Chemical Society meeting in Dallas, which was incidently a particularly enjoyable gathering. I presented two talks, one of which described some of the latest developments of the Green Lab Notebook project (for slides, see slideshare and figshare). After having given a couple of talks about this as yet unfinished app, it’s time to start the run-down checklist for what goes into a minimum viable product.

As somebody whose former professional software creation experience is based on the more traditional approach of infrequent updates to monolithic platforms that are installed on users’ personal computers, and for which the upgrade process is seriously painful (not to mention dangerous), the minimum viable product (MVP) idea took a bit of getting used to. I’m not sure I ever heard the term before I became an entrepreneur, and in the era of shrink-wrapped software, the notion of putting out a teaser-sized product with just enough features to get people interested and wanting more (or not), was definitely not a winner. In this modern era of app stores, web clients, software as a service, and cloud computing, it’s pretty much the only viable strategy for software products that don’t already have a well established market with almost all of the details already worked out.

The Green Lab Notebook (GLN) app is a very ambitious project, all things considered. Ultimately it will be suitable for capturing a complete record of a synthetic preparation, starting at the planning phase, through the in-progress observations, to the summary analysis and archival. It is being designed from the ground up to be utterly uncompromising in terms of the digital purity of its datastructures, which means that the reaction scheme can be interpreted by software as well as a human, which is a detail that is, in this industry, frequently ignored and usually half-arsed. The app seeks to bring in green chemistry principles at every level, from calculated metrics to reference databases to reaction transforms, using structure-centric cheminformatics to make everything as convenient/automatic, robust and flawless as possible. It will also grow to include numerous options for sharing data, generating publication quality graphics, synchronising with centralised servers, and integrating with private or public services. And all done with an interface that provides an excellent user experience on a tiny little touchscreen iPhone/iPod, or the slightly less constrained iPad, and without requiring a continuous connection to the network.

But not all of this will be in version 1.0. Instead, the first-released version will have the basic necessities fully functional, and these include:

That leaves quite a few features as temporarily absent stubs. For example, the inclusion of feedstocks is intended as a means to precurate compounds with a favourable and well understood environmental lifecycle, a way to track quantities of materials in one’s own personal work area, and ultimately an entrypoint into the wide world of compound purchasing. The reaction transforms will also not make it for the first version. The idea for these is twofold: to curate a list of highly recommended green-favourable reactions and make it as easy as possible to search and apply them to a product or starting material; and, to provide a facile way for users to upgrade an experiment into a transform, so it can be automagically mapped to another related synthesis, with all of the appropriate details filled out. And this will be done in a way that maximises nuances such as sketch layout and orientation (which is not possible using the most common SMARTS/SMIRKS methods in general use today). There are also some hand-holding features that are planned, such as educational references about green chemistry principles, and a series of tutorials: these will not be in the first release. Early adopters will need to be slightly more adventurous than users who get on board after the app has had a chance to mature.

As they say, even the best designed software falls apart on first contact with actual users… hence the minimum viable product release, which will allow the follow-up features to be guided by initial feedback, and the failures and successes encountered along the way.