There has been a lot of work, many products, and plenty said on the topic of converting chemical structures from one format to another, and a number of well used and highly regarded packages (e.g. OpenBabel) that specialise in providing this capability. Less well discussed, it would seem, is that when it comes to connection-table formats used to encode chemists’ sketches of molecules, there are no software packages and no two formats for which a round trip conversion can be reliably carried out without losing information, even if the chemical entities being expressed fall within the applicable domain of both formats.

And this is not just because most available cheminformatics software is bad (although this is certainly the case), but mostly because it is actually by definition impossible, due to the way the datastructures have been designed.

To illustrate the point, I want to use six format examples, and consider pairwise interactions between them, and how often format conversion is viable: 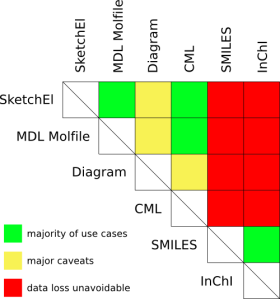 The colour-coding is simple: green means that there is a large and useful overlap between the applicable domains that can be interconverted without any significant issues; yellow means that it is frequently possible with only minor information loss, though very easy to inadvertently stray from the path; and red means that you should never convert between these formats if you want to get your original structure back.

As my introduction would suggest, these file formats are all quite different in their design scope. There are plenty of other atom-based formats that I haven’t mentioned, but in order to avoid getting too verbose, I’m only including those which are designed for use with 2D coordinates or no coordinates. All of them are intended to conveniently capture chemical structures as atoms and bonds, but the primary methods of input (user or algorithm) and deliverables (graphics presentation, algorithmic analysis, database indexing) are quite orthogonal, and quite incompatible with one another.

When converting a chemical structure from one format to another (A → B), the definition of success varies depending on the objective. Sometimes it is quite adequate to ensure that if a chemist were to study A and B, then it would be concluded that they do indeed represent the same species, even though the bytes contained inside the datastructure are different, and the onscreen rendering may be also. Othertimes it is necessary for them to be more literally identical: same atom coordinates, same atom and bond ordering, same wedge bonds, same atom mapping, same style of hypervalent functional group representations, etc. Sometimes it is even acceptable to provide a different tautomer, or even a different protonation state. In other cases it is unacceptable to even lose custom metadata.

What is meant by a fully reliable round trip is more completely described as being able to pick any two formats, starting with a molecule A, and carry out the sequence: A → B → A’ → B’, such that A and A’ are identical, as are B and B’. And what is meant by identical is that when they are serialised and written to files, the files have the same series of bytes.

For the most part the needs of cheminformatics are not quite this stringent: the distinction is whether important data was lost. The definition of important varies, but for any kind of cheminformatics software deployment, it would be hard to argue against the merits of erring on the side of losing as little as possible.

So now lets take a look at how each pairwise permutation works:

The bottom line is basically that there is no such thing as a molecular structure format conversion that does not involve information loss, unless one is very careful to limit the domain of applicability. Any software description claiming otherwise is a misrepresentation. The problems I summarised very briefly above are just the tip of the iceberg: dozens of doctoral theses could be filled with all of the details.

This situation sounds rather bad, and from a certain perspective it is, but there is a fairly simple solution to it: don’t ever throw away the original file! Think of chemical data like a scientist’s original lab notebook. As long as you have that, you can convert anything to anything as much as you want: if you lose something important along the way, just go back to the original, and reinterpret. Remember that, and everything will be fine.

3 thoughts on “On the myth of chemical structure format conversion”