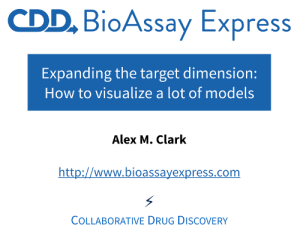 It’s been awhile since I wrote a post. Most of my work these last few months has been on the BioAssay Express project, which has been advancing forward on every front: technology, data, collaborations, commercialisation, and even a software patent.

A lot of the software improvements have been of the kind that involve filing off the rough edges and paying back technical debt (to excuse the mixed metaphor) necessary to turn an advanced late-stage prototype into a product that is worthy of being turned loose to a customer who goes on to use it to solve their own unique scientific problems. This is just as much work as building fun new toys, and is satisfying in a different way, but it does not generate quite as much blogworthy material.

To break a bit of a dry spell with regard to conference presentations, I will be giving a presentation at the American Chemical Society meeting in San Francisco, describing some of the scientific capabilities that are possible with the BioAssay Express. This will happen in the Advances in Data Visualization session of the Chemical Information (CINF) division, first thing on the Monday morning. The graphic shown above is the title page for my talk, which is about as much as I’ve done. I will also be putting up a poster on the preceding Sunday evening in the Medicinal Chemistry (MEDI) division, which will describe some of the value proposition of assay informatics, as well as a variety of other events – one of which is organised by Collaborative Drug Discovery (more later) – so it certainly should be a fun week.