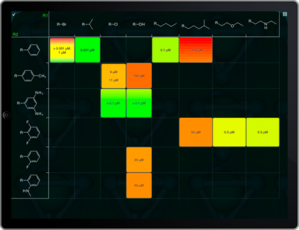 The SAR Table app is currently undergoing surgery to add a major new feature: the matrix view, which allows two columns to be plotted against each other, e.g. R1 vs. R2. Cells at the intersection of two values are plotted with a colour/gradient that is indicative of the response, i.e. the activity. The sample snapshot to the right displays several activity values using the “heat map” colour scheme.

The new feature is in its early stages, and the visual feng shui will certainly mutate before the next release, but the core functionality is operational. Stay tuned for the next major version.