The designed-for-mobile sketcher that was introduced with the Mobile Molecular DataSheet app in 2010 is based on a collection of primitives that was later published in the scientific literature. Over the last year or so the molecule drawing interface has received a lot of fine tuning, but not many major new features. The next version of MMDS (1.3.6), currently awaiting approval on the AppStore, has two important new primitives, which are seen in a redesigned bond sub-bank.

The first of these new primitives is used to add two new substituents to the subject atom:

This feature addresses a frustrating issue that comes up when one needs to add two substituents to an atom that has non-hexagonal neighbours, i.e. the current bond angles are not multiples of 120 degrees. The operation shown above – adding two methyl groups to the 5-membered ring – would previously be done by adding the two new substituents separately. Problem is, for the first one, the sketcher assumes that the operator just wants to add one new substituent, and so picks a geometry that is inconveniently unsuitable for adding the second one, and so a cleanup process is required: the new substituents have to be rotated into position, in order to obtain the result shown above.

The add-two-substituents primitive determines the projected angle that would be suitable for one new substituent, then adds two at +30 and -30 degrees. Which is usually the desired outcome.

The other new primitive is a bit more exotic: insert methylene. One drawing operation that comes up quite often is the need to modify a sketch by inserting a new chain linker atom, i.e. methylene, into an existing bond. This can now be done in a single action: 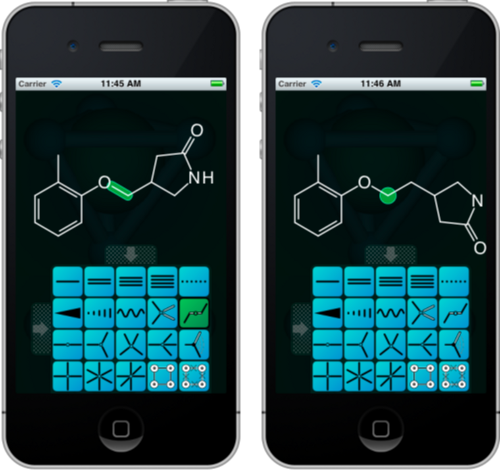 Obtaining this effect is a tedious process for all but the most powerful of desktop-based sketchers. In earlier versions of MMDS, it was actually not too difficult, if you happened to know how: the cut-and-paste sequence could be used to cut away half the molecule, then put it back after extending the chain. But this is a lot more work than just hitting a button.

All going well, the new version of MMDS should be up on the AppStore soon. The new primitives will also be included in MMDSLib, which means that all of the derived apps will also be updated, in due course.